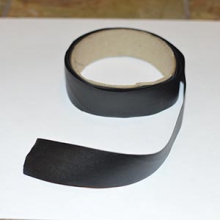 Rubber foil (or VDS foil as it is somtimes referred to) is a very thin layer of rubber (or sometimes Urethane, Surlyn or other similar material) that is used in the construction of skis and snowboards for 2 main purposes.

First: it is used as a bond enhancing material most commonly used between hard substrates. The most common locations are between the steel edges and the bottom fiberglass or other composite reinforcements, or when bonding certain metals and other hard substrates that are a little more difficult to bond.

Secondly: it may also be used in larger amounts to "dampen" certain frequencies being transmitted through the ski or board to quiet down the ride and reduce chatter in icy and hard packed conditions.

The most common types of foils are made of a natural vulcanized (or sometimes a synthetic) rubber foil approximately 0.2mm thick.

My introduction to rubber foil (VDS) was around the year 1984 when my partner and I at Powderstick Snowboards decided to discect a variety of popular skis to study how they were put together. One pair of Atomic ARC racing skis were almost impossible to pull apart - we were literally using hammers, chisels, and pry bars and they still would not come apart. Eventually after a lot of effort we got them apart in several pieces only to see that bonds that were most difficult to pull apart had aluminum layers bonded with this very thin black layer of rubber - rubber foil. We determined this stuff was like magic when it came to bonding and began a quest to learn more about it. But in the pre-internet days research like this was not easy and it was a couple years later before we finally found the actual material used in the skis at a European rubber manufacturer called Haberkorn.

The next interesting data about rubber foil we came across around the year 1987 when we had started using an epoxy resin made by a company called Ciba Geigy. This Araldite epoxy was excellent and was used by many of the big ski companies of the day. In ther data sheets for the resin they published peel and shear strengths of the resin bonding a variety of substrates and one stat really stuck out to me - bonding aluminum to aluminum with and with out rubber foil. Without foil the specifications were decent, but the results with the rubber foil between the aluminum layers were almost 400% better than without - here was the "magic" material we had experienced a few years earlier demonstrating its prowess in a published data sheet from a major adhesive manufacturer. We actually used their data sheet result in our catalogs after that and had the data sheet study to back it up.

OK so that says a bit about "rubber foil" but where the hell did the name VDS come from then? Well, in Powderstick's 1987 line of boards we were using this "magic" bonding ingredient extensively, and were looking for a catchy marketing phrase to add to our catalog. At this point rubber foil was not widely used in snowboards so it was kind of innovative and we really wanted to highlight it especially because we were using it extensively both for bonding and for dampening in our boards.

Rossignol skis had a system in some of their high end skis they called VAS - "Vibration Absorption System" that we thought was cool, but it was trademarked, so we copied the idea but rephrased it VDS or "Vibration Dampening System" in our catalog and magazine ads to avoid any hassles from their legal department. We used the term VDS to refer the rubber and surlyn foils we used for several seasons in our catalogs, and when Option bought the Powderstick assets in 1991 and hired me to design their boards and factory, we also used it for many more years after that.

Then, in 1998 when I opened Custom-shop.com and SnowboardMaterials.com to sell custom skis and boards as well as ski and board materials online, I also referred to the rubber foil we sold as VDS, and the term gradually became sort of a generic term to refer to this type of rubber foil. At that time we were pretty much the only vendor selling raw materials to ski and board builders online and as such everyone on the board and ski building forums referred to it as VDS as that is what they purchased from us.

So it a roundabout way the term VDS comes from my early days in the industry at Powderstick.. oh the nostalgia...

Social Bookmarks
back to top